State Minister for Foreign Affairs M Shahriar Alam has called upon the young people and climate activists of Bangladesh and the UK to join hands and emerge as the greatest force for good for their respective countries in protecting the planet.

He urged them to raise their voices at the COP26 and beyond, and be an asset to their local communities in saving the planet, people and nature for succeeding generations. “There is no planet B or plan B.” 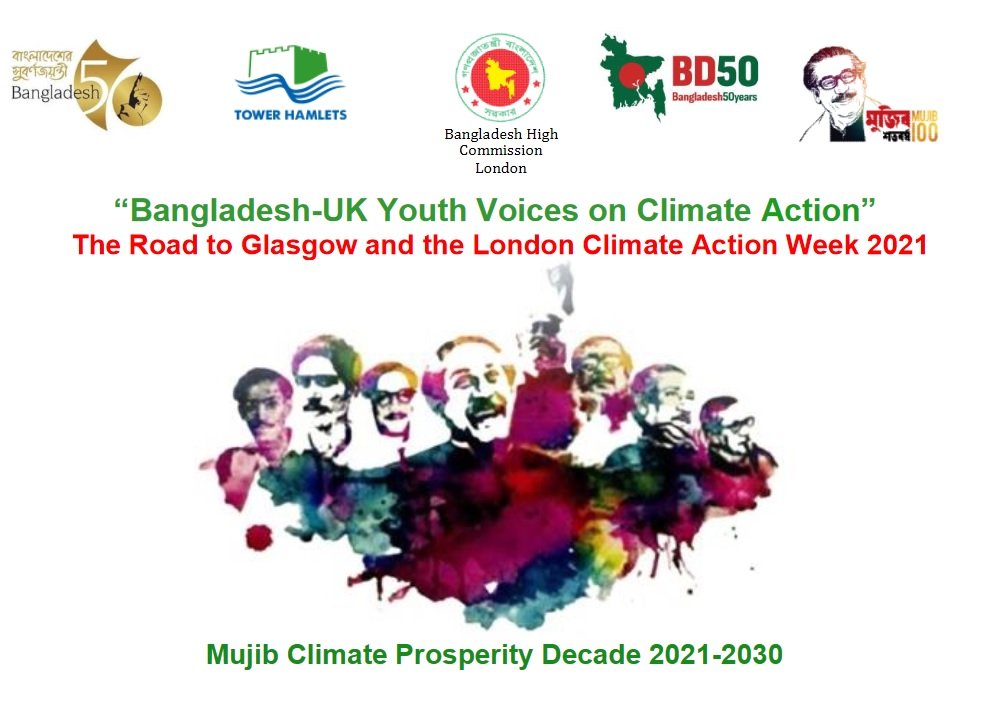 It aimed to engage young climate activists in Bangladesh and the Bangladeshi-British diaspora at the Tower Hamlets Council, home to the largest number of Bangladeshi expatriate community in the UK.

With a population of some 163 million, Bangladesh is beset by over 10 million climate refugees, despite it being the source of almost none of the emissions now warming up the planet, said Md. Shahriar Alam,Bangladesh’s State Minister for Foreign Affairs, speaking virtually at a climate dialogue. “More than 10 million Bangladeshis have already become climate migrants, while we continue to generously host 1.1 million forcibly displaced Rohingya from Myanmar at a steep ecological cost,” the minister said.

More than 750,000 Rohingya refugees, mostly women, and children fled Myanmar and crossed into Bangladesh after Myanmar forces launched a crackdown on the minority Muslim community in August 2017.

Referring to the country’s role as head of the Climate Vulnerable Forum, Alam said: “Bangladesh, with a near-to-nil carbon footprint, ranks number seven in the Global Climate Risk Index 2020’s most at-risk country and a profound victim of global emissions.”

He warned that by 2050, rising sea levels will submerge 17% of Bangladesh’s coastlines and displace more than 20 million people. 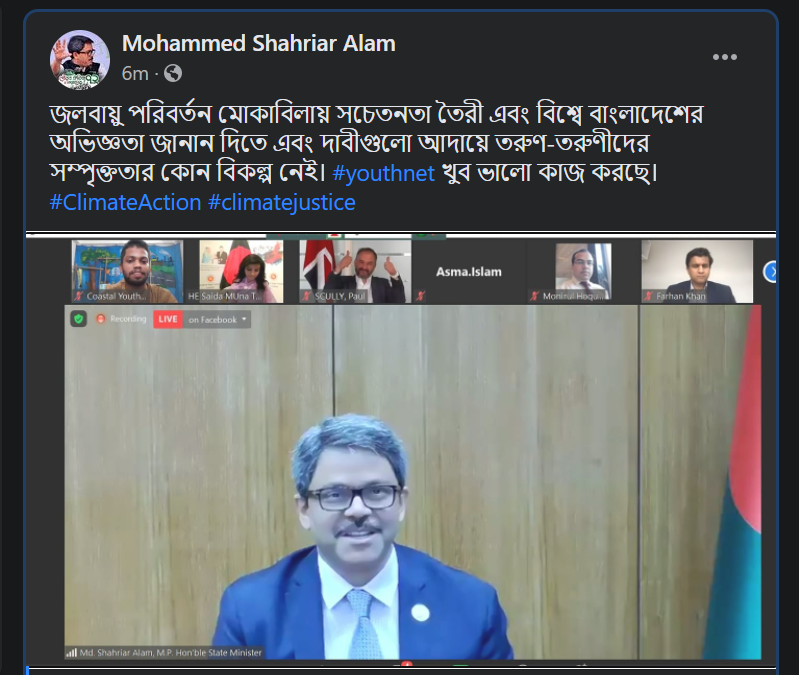 The State Minister for Foreign Affairs, Md Shahriar Alam MP said, “This year we are celebrating the Golden Jubilee of Bangladesh and the birth centenary of the father of the Nation Bangabandhu Sheikh Mujibur Rahman. At the same time, we are celebrating the 50th year of our diplomatic relationship. And also this year Prime Minister Sheikh Hasina has declared the Mujib Climate Prosperity Decade 2030 and Action Plan, and that obviously charting a low carbon development pathway for Bangladesh,” the state minister said.

The state minister said that Bangladesh will look forward to the UK’s robust and ambitious climate leadership at COP26 and beyond. He commended the event for connecting youths from Bangladesh and Bangladeshi diaspora in Tower Hamlets.

Among other prominent politicians attending the virtual event were Rushanara Ali MP of the Tower Hamlets Borough, and Nahim Razzaq MP, Member of the Parliamentary Standing Committee on Ministry of Foreign Affairs and Convener of Climate Parliament Bangladesh. 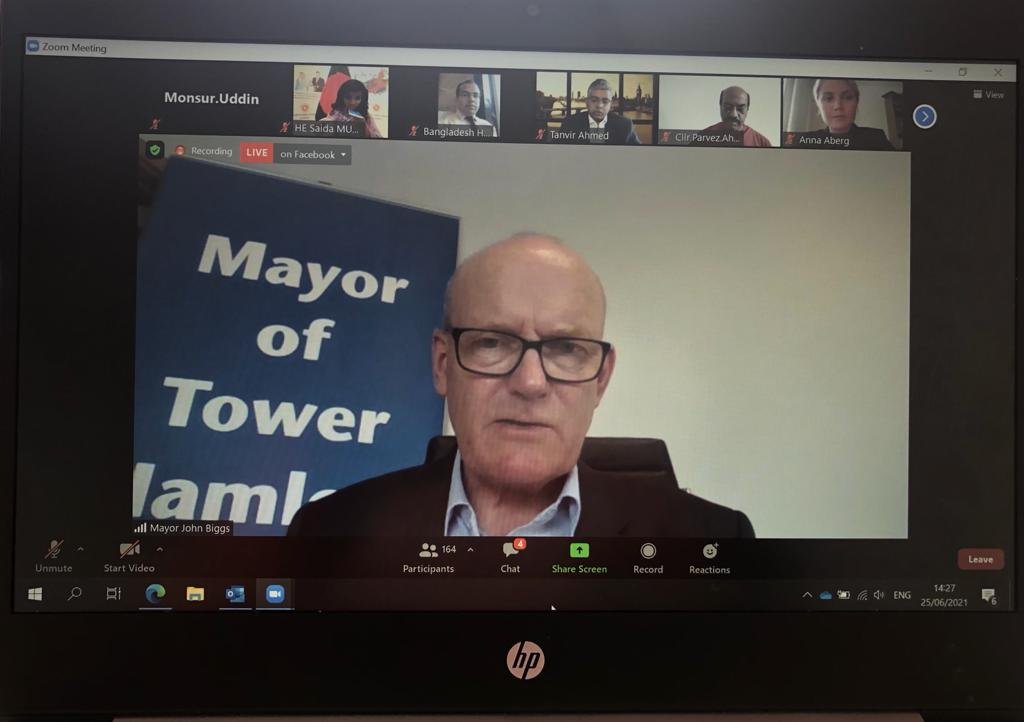 John Biggs said collaboration between youth in Bangladesh and the young people from Bangladeshi diaspora in Tower Hamlets can be a powerful force for change. “I greatly appreciate this event and really appreciate the Bangladesh government’s initiatives to combat climate change,” Briggs said. 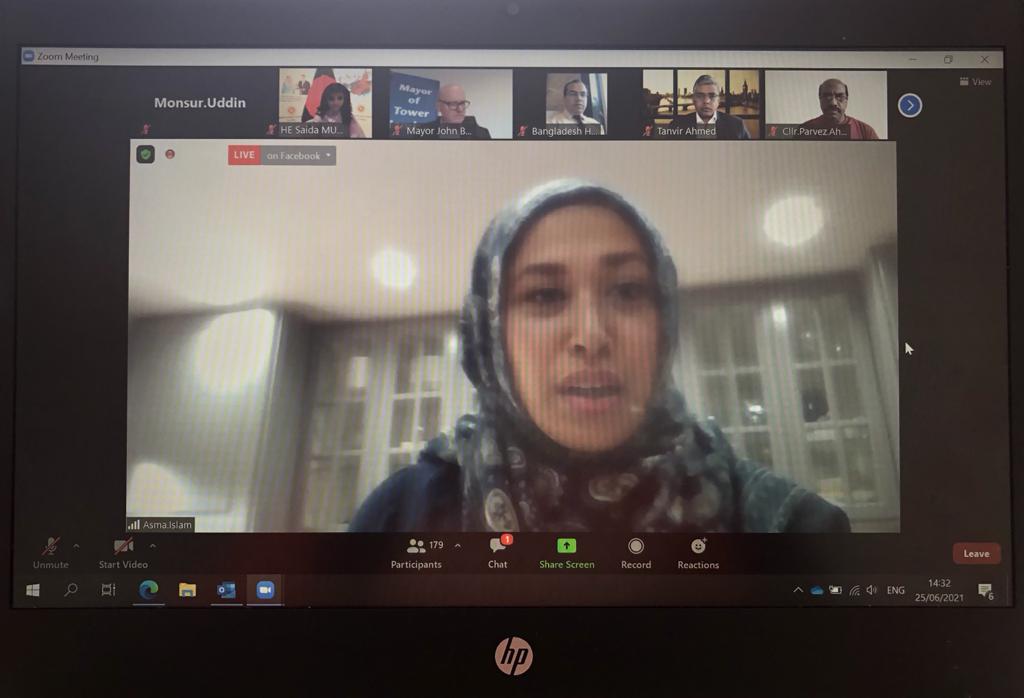 Asma Islam, a local councilor at Tower Hamlets said that this event shows how important it is to partner on climate change issues. “It really shows that honorable Prime Minister Sheikh Hasina has really put this climate emergency in the forefront of policy, making sure that Bangladesh is also leading and demonstrating the work that everyone can do,” she said.

Paul Scully MP said that the event was a great and memorable occasion to remind everyone about the great relationship that Bangladesh and UK developed over the last 50 years. “It is important that this is a global effort, that governments come together to support each other. We have a community in Bangladesh and UK to exchange expertise, to share our technology, to facilitate partnerships, and to identify common challenges to combat climate chang,” said Scully. 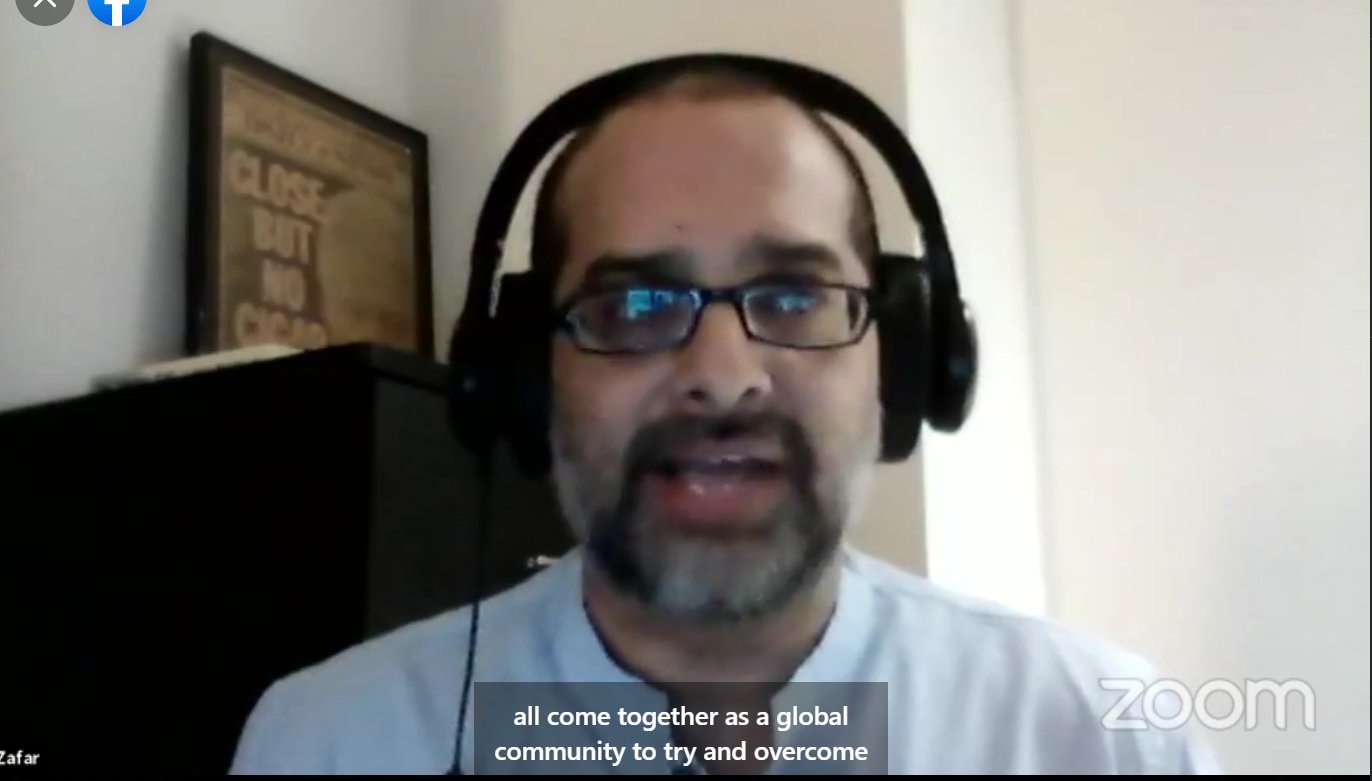 Editor of Dhaka Tribune newspaper — which is a media partner for the event — Zafar Sobhan said that climate change is the emblematic issue of the twenty first century. “Bangladesh is absolutely at the frontline of climate change. But the good news of course is that as we celebrate our 50 years of independence, Bangladesh has come so far, we have achieved and accomplished so much, that I feel that we are ready and we have the visionary and inspirational leadership to in fact take on this unique challenge,” Sobhan said. 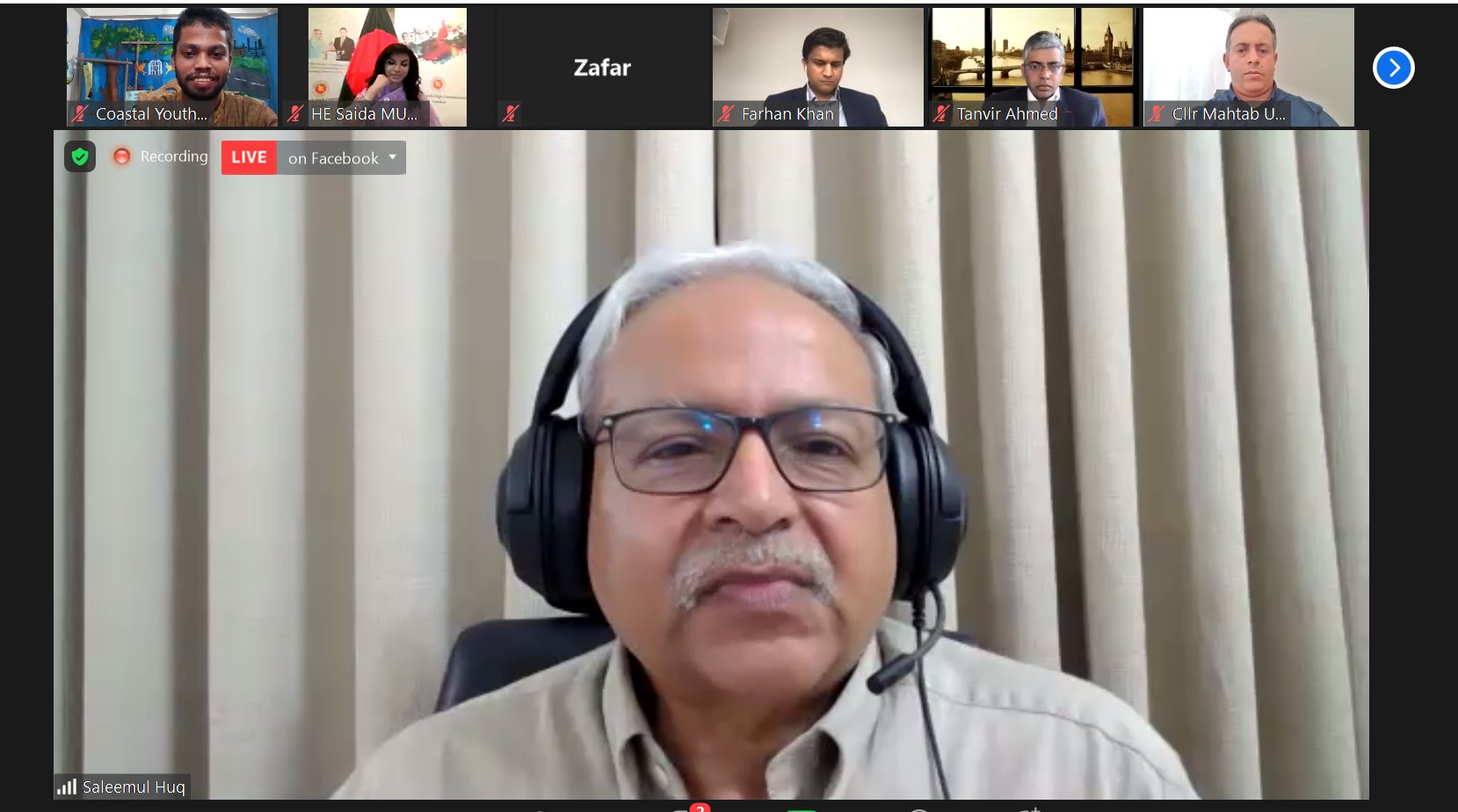 Prominent climate activist and scientist Saleemul Huq said that there is a significant network of university students and non-student youth in Bangladesh that is being mobilized on the climate change issue. “We need to be linking up with their counterparts in the UK. I know that school kids in Fridays for Future are already doing that, but I think we need to do this much more strongly on a bilateral basis going forward,” Huq said. 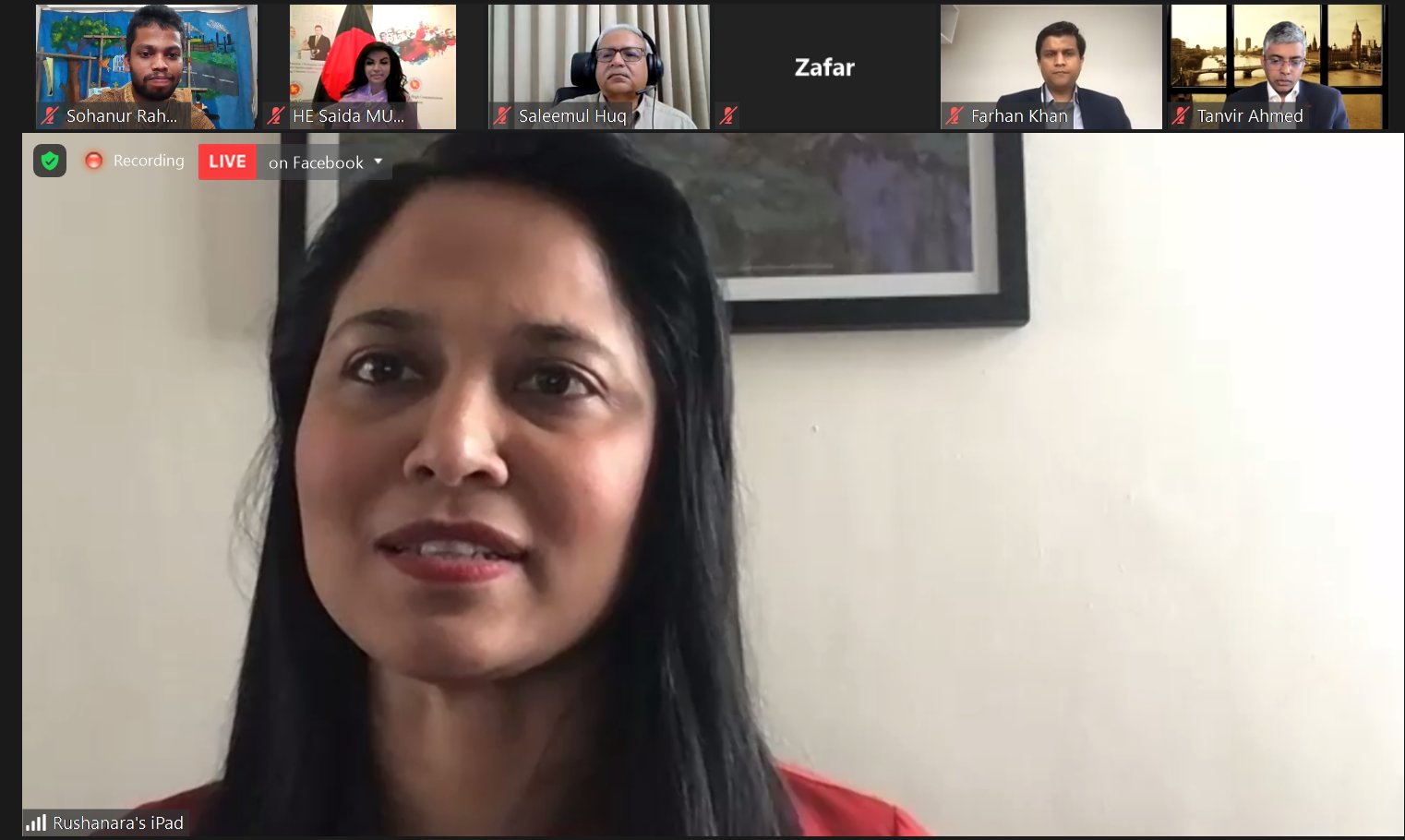 Rushanara Ali MP of the Tower Hamlets Borough said Bangladesh achieved remarkable growth despite the setbacks by climate adversities. “I think it is wrong that our government has cut the aid budget and Bangladesh has seen a massive hit on its aid budget. It’s importance that they support the climate agenda, but also support poverty alleviation.” 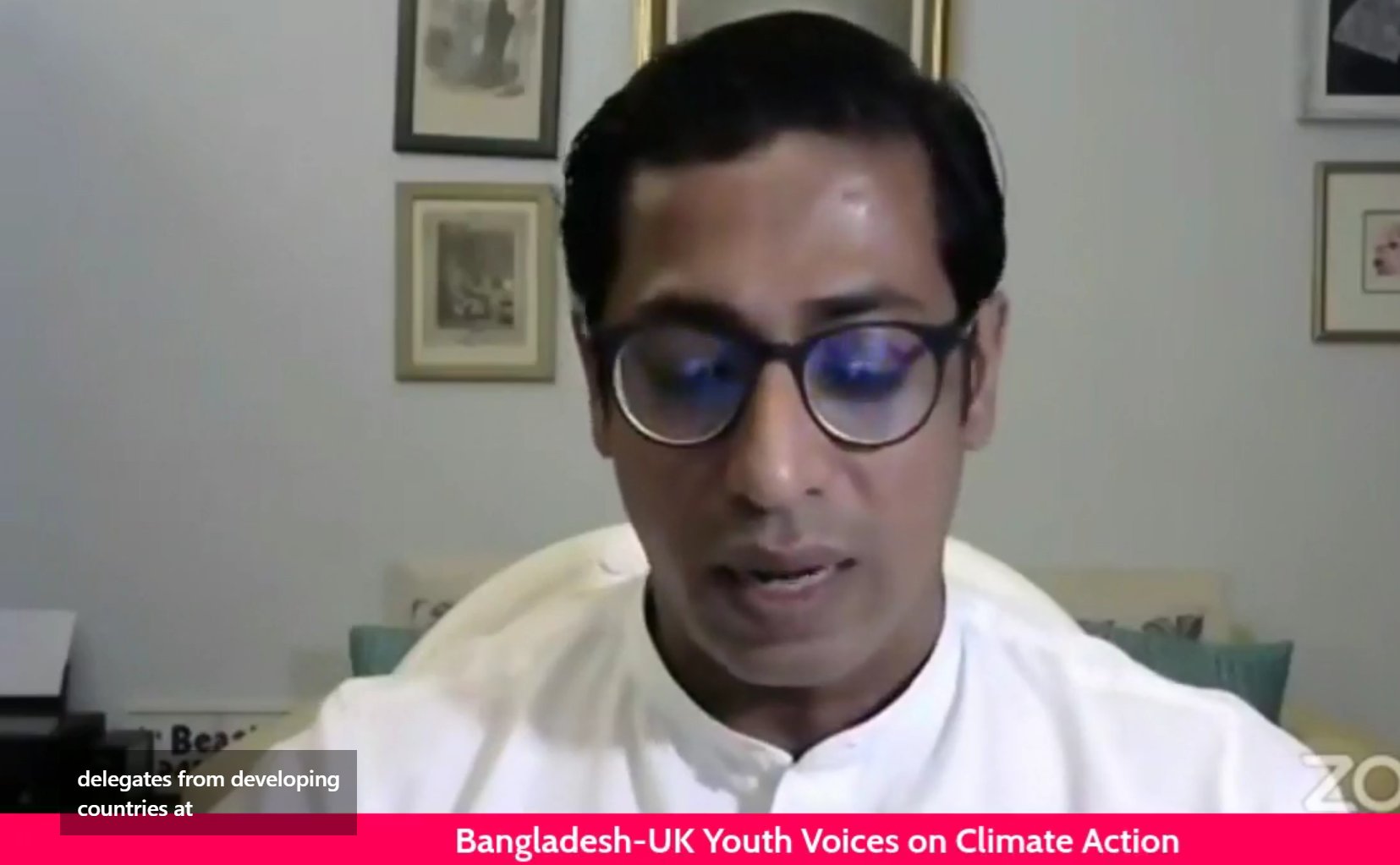 Nahim Razzaq MP said that Bangladesh is a champion in adaptation and the UK is a champion in mitigation. “The partnership that is being promoted here can bring about major changes. The youth that we are engaging here are very important. I have been engaging with them and discussing how we can make the change happen. These youth in Bangladesh and the UK need to build a bridge together so that they can work towards a common goal.”