Prof. Saleemul Huq, one of the world’s top climate scientists, has signed a petition launched by Aruba Faruque, a 14-year-old schoolgirl of Bangladesh calling on the Prime Minister of Bangladesh to implement the Bangladesh Planetary Emergency Declaration and to incorporate climate education in the school curriculum, confirms Fridays for Future Bangladesh founding member Sohanur Rahman.

Considering the youth climate movement, The Jatiya Sangsad on 13 November 2019 unanimously adopted a resolution for the declaration of a Planetary Emergency aiming to grow global awareness for saving the earth from its existential crisis of climate change, the devastating impact of the disasters and increase in extreme weather events.

The declaration came at a time when the earth continued facing the irreparable loss of biodiversity, looming food insecurity, rising water crisis, unprecedented pressure on oceans and unsustainable use of resources.

Aruba launched this petition on 19th March 2021, the day of Fridays For Future Global day of Climate Strike. This Petition becomes the first-yet National Petition launched by an under-18 citizen of Bangladesh. The Petition has collected 1700 signatures till the 1st of June through both online and in-person circulations. It will be presented to the Honorable Prime Minister Shiekh Hasina, Winner of the United Nations Environment Prize, on 26th June from 100 days of its launch.

“I am truly impressed by the exemplary dedication of Ms. Aruba Faruque towards her country and it has been a pleasure to support the petition for implementing the planetary emergency declared by the Bangladesh Parliament and also the recommendation to include climate change in the school curriculum in Bangladesh.’- said Prof. Saleemul Huq

Prof. Huq, who is one of the few people who has attended all 25 annual UN Conference Of Parties meetings, held from the first one in 1995 in Berlin, Germany, to the relocated 25th one in 2019 in Madrid, Spain. (The COVID-19 pandemic postponed COP 26 in Glasgow, Scotland, the UK from November 2020 till November 2021.)

Prof. Huq is a leading voice in the world climate science community, has focused on sustainability and environmental issues since the 1980s, with numerous publications to his credit. In 1984, he founded the Bangladesh Center for Advanced Studies, where he served as director. Over the decades, Prof. Huq has served as a Senior Fellow in the Climate Change Group at the International Institute for Environment and Development, and as director of the International Centre for Climate Change and Development at the Independent University of Bangladesh. He has worked in London as well as Dhaka.

Prof. Huq has extensively contributed to the Intergovernmental Panel on Climate Change, the United Nations organization that co-won the 2007 Nobel Peace Prize. For the IPCC’s Third Assessment Report, he served as lead author of the chapter on Adaptation and Sustainable Development. Prof. Huq won the Burtoni Award in 2007, and he received the 2020 National Environment Award from the Government of Bangladesh. Now, Prof. Huq is especially focused on researching and educating about Loss & Damage, the current and already devastating phase of the anthropogenic global warming crisis, and working with Aruba and other like-minded young people.

As Aruba explained, “The Bangladeshi Parliament commendable adopted a planetary emergency declaration, back on Wednesday 13 November 2019, but not much has happened in the 18 months since then. I knew we had to let the political leaders realize we urgently need serious action now. And I realized that our schools must do a far better job educating young people, at all grade levels, about the extent of dangers posed by the climate crisis and the 6th mass extinction of species. The idea of a petition then just naturally came to me.”

Aruba, who has been called “the Greta Thunberg of Bangladesh by The Sustainable Hour, a radio station based in Australia, after the Swedish Climate Activist, environmental champion. Aruba’s hero, Greta Thunberg said, “Making our planet a much greener, peaceful, just place in any and all the ways that I possibly can be the focus of my life.” 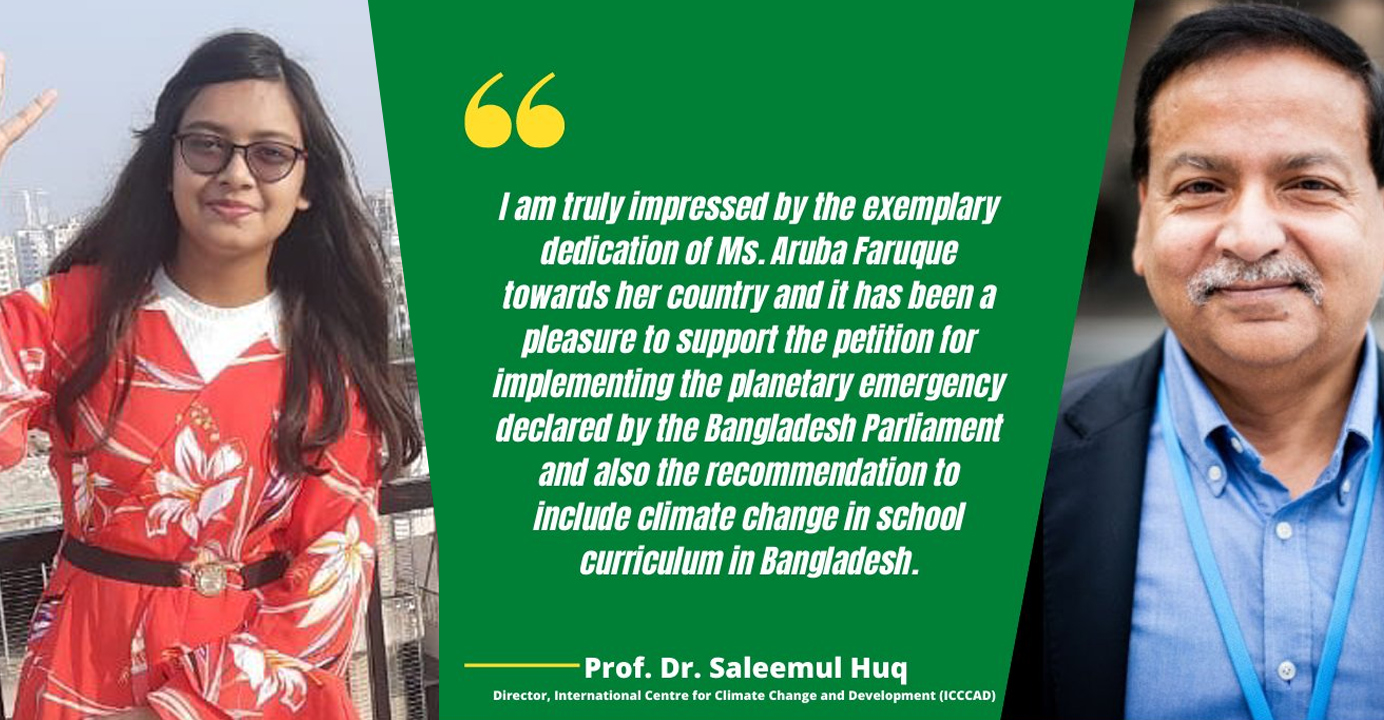 Aruba became very passionate about climate justice and climate activism in mid-2019. In December 2020, she was designated the youngest-ever ConscienceLAND Ambassador, a role that encourages positive actions for sustainability and Environment, such as Change Wednesdays. Aruba and her parents, younger brother, and infant sister all live in Noakhali, Bangladesh. She studies in 9th grade at Noakhali Govt. Girls’ High School.

Janine O’Keeffe, an Australian engineer and climate activist living in Sweden who actively contributes in the Fridays For Future International Map Workgroup, said, “Climate Activist Aruba has wisely pinpointed the need to educate about the climate crisis in schools. Without such education, the government will find it impossible to act urgently to reduce the emergency. The changes required are so broad and deep at every level of society and uneducated citizens are far more likely to react unwisely. Today’s politicians have been dealt a very difficult hand, and they need to be bolstered by climate-literate citizens, and voters, of all ages.”

The petition may be found here for signing and sharing, translated into English (Implement the Bangladesh Planetary Emergency Declaration and Incorporate climate education in school curriculum – Action Network).